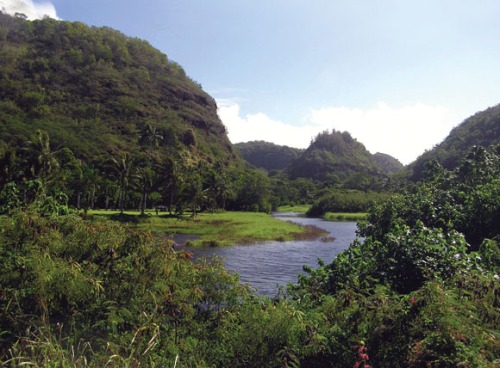 Gary Gill has big plans for the future of Waimea valley. He just doesn’t know exactly what they are yet. It’s not surprising. As executive director of Hiipaka, the nonprofit created by the Office of Hawaiian Affairs to manage the park, he just took charge of the valley on Feb. 1. It’s been a mad rush to get basic systems in place. “Up to now, we haven’t had time to look at long-term planning,” he says.

That’s not to say Gill doesn’t have a vision. The 1,875-acre park will continue popular programs, like its botanical gardens, but he expects a stronger focus on native Hawaiian culture.

“This is a place for local people to come,” says the former city councilman.

“We’d like to see a lot more cultural programs: hula and weaving and Hawaiian language. Over time, we hope to make the valley a living puuhonua (sanctuary).”

Gill believes visitors will also be drawn to authentic Hawaiian culture. That’s an important consideration, because the valley has operated at a loss in recent years. OHA plans to spend millions of dollars to take care of the park’s long-deferred maintenance, but, ultimately, Waimea should be self-sustaining, he says.

“We’ll probably be increasing the business staff,” Gill says. “We have an existing gift shop, which we’ll be redefining, and refocusing on native Hawaiian goods. We’ll also be reopening the Proud Peacock [restaurant] and concentrating on improving facility rental space.”

Butch Helemano is the kahu of Puu o Mahuka, the largest heiau on Oahu, which sits on the bluff overlooking Waimea. “Some people don’t want to see any entertainment in the
valley, but I believe the tour buses belong there,” he says. “You have to have respect for the culture, but it’s possible to have these programs without bastardizing Hawaiian culture. We just need real practitioners.”

Gill knows that, for any of his plans to succeed, he’ll need the support of community members like Helemano. “Everyone loves Waimea,” he says, “and everyone has a stake in it. But if you want people to come, the first thing you have to do is invite them.”